This is our last blog but with the photos.

You may have noticed that all the photos that were in the blog, going back to our trip around Europe in 2011 have gone.  I am going to try and get them back. I SUGGEST THAT YOU  delete anything that comes through to you by e-mail between now and DECEMBER 1st as we shall not be writing anything new before then at the earliest.
I think that I have it sorted now, although I'm not completely sure. Time will tell!

Our border crossing from Tanzania to Kenya went very smoothly apart from
the fact that the parking break on the truck jammed half way through a
tricky bit of manoevering in a congested parking area. In the manual it
simply tells you to press the Emergency Parking Break Release. Not that
easy in a crowded situation with a large number of experienced African
lorry drivers cheering you on!

However, that problem resolved, eventually, we passed through all the
official bits without problem and set off on our way to Nairobi. Having
missed a turning along the way we arrived in the centre of the city during
evening rush hour. By the time we found the campsite it was dark and we
were very, very tired and I was quite irritable! Still nothing that a
glass of beer and a good nights sleep couldn't put right.

During the following week we had the most enjoyable time with an old
college friend of mine and his wife. Ate a lot of food, drank (probably
more than we should have)and laughed a great deal. We were taken to some
very interesting places...to the Daphne Sheldrick Foundation to see the
orphan elephants which come from all over Kenya and are tended by their
keepers on a 24hour basis and fed on a special formula developed over the
years, with luck and a lot of patience these elephants are released into a
National Park to spend the rest of their lives unmolested. 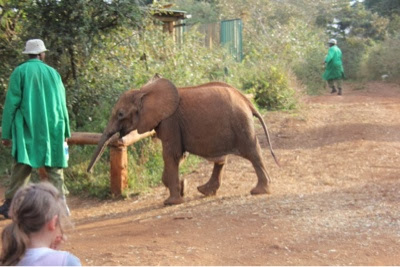 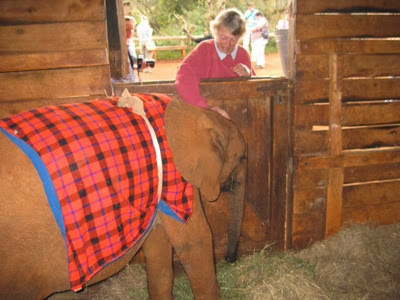 They also took us to a place where they recycle flip flops, and another
where a man makes the most beautiful glasses out of old bottles and then
etches them with wild animals, birds or whatever else you fancy. We ate
out a lot, laughed a lot and had great fun.

Apart from that we did spend a lot of time talking with Mikey and Jane
about where we should go in Kenya during the month that we had available.
We settled on a trip to the Masai Mara and then a sweep north to Nakuru
and the lake so that we could see some other friends.

Going to the Mara proved to be much more of a trip that we had expected.
Our map showed a decent road. It turned out to be a very rough dirt track
with lots of pot holes and detours. When we eventually arrived, a day and
a half after leaving Nairobi, we found a lovely campsite and a very
helpful man to take us into the Reserve and show us around. Another
significant highlight of Africa. Lions, 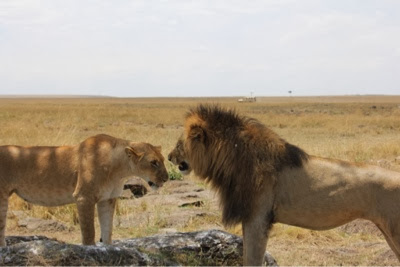 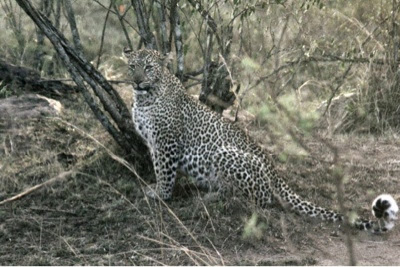 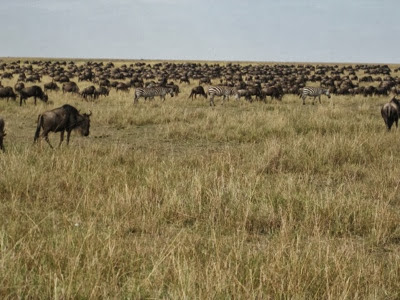 leopard more wildebeest and zebra than you can imagine. There were also
lots and lots of tourist vehicles. Difficult to take a photo without a
Land Cruiser showing up somewhere,however we did manage to have a pair of
lions to ourselves for about 20minutes though we had to share the leopard
with lots of others....well worth it though!!!

After the excitement of the Mara we found another road misrepresented on
our map! A road of about 50 miles was shown as tar; actually slick mud and
even worse when it rained. The result was that we had to spend a night
parked up on the side of the road miles from anywhere. Not the first time
we have done that, of course, but the first time in Kenya, where we had
been told it was not advisable to do so. Still, in the morning we were
able to carry on although negotiating our way down hill past a large truck
bogged down in the middle of road was a bit nerve wracking.

One of the things we hadn't really appreciated was how high most of Kenya
is. Nairobi is at about 1800 meters and, going west to the Mara, you climb
a bit and then drop down into the Great Rift Valley at about 1500 meters.
At school we always drew the floor of the Rift Valley flat. I was really
surprised to find it full of hills and the remnants of some sizable
volcanoes. Although I knew that there we lakes in the valley, there were
far more than I expected. We camped for a few nights beside Lake
Naiavasha, which has some lovely birds and hippos and is freshwater. Right
beside it, separated only by a very narrow causeway is Lake Oloidon , no
hippos and lots and lots of flamingoes. 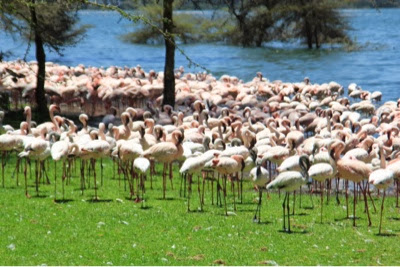 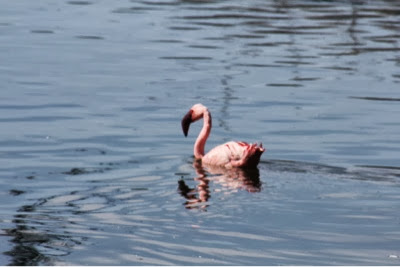 Flamingoes don't like fresh water. There is lots of evidence that Lake Naiavasha has been the home of
flamingoes in the not to distant past. Apparently, depending on who you talk to, it's down to global warming!

Now we are back in Nairobi and will be flying home on September 24/25th
after spending the week with Mickey and Jane whilst putting the truck into
storage. Home for a holiday!
Posted by greynomads at 1:03 PM