This is the one you should have received from Mombasa

Our time in Kenya has been split into 3....... Safari, packing up the truck and WAITING!!!! At present we are in the waiting phase. We went through this when we were leaving South America. There each day we heard "mañana, siempre mañana", tomorrow, always tomorrow. Here we get the same sentiment, only the words are slightly different, "maybe even tomorrow!" I first heard these words over 20 years ago when I visited Kath, my youngest daughter, during her gap year in Tanzania. I had hoped that things would have changed. Well, maybe even tomorrow! Still, there could be worse places to be waiting. 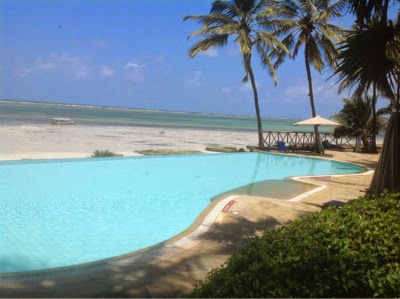 The swimming pool with a view of the beach just in front of our hotel room.  From this position we were able to see our ship both arrive and sail carrying our motorhome.
Before coming down here we took the truck north for a safari with Mickey and Jane.  This was quite different to the previous safari with them as we were going to camp, them with their roof tent and us in the truck. We had the most amazing time with some wonderful animal sightings, on the last day, all the cats and the rarely seen, African Wild Dog. 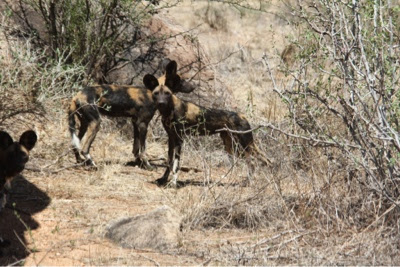 New to use was the Gerenuk, the long necked antelope which reminded us of the lamas and alpacas that we had seen in South America. 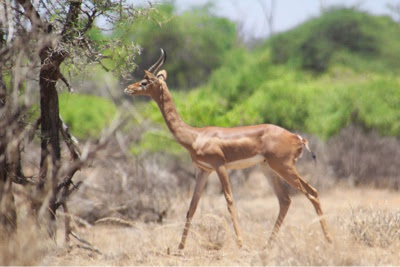 The part of the Reserve we visited is know as Buffolo Springs.  This is why! Fortunately, the spring has been walled off to enable people to swim without the fear of intrusion of wild animals. (I was told that there are often crocodiles in the swampy ground just behind the spring - the dark green area just above the pool on the left) 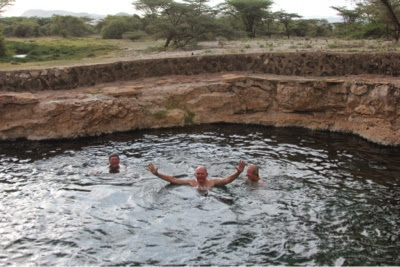 We also saw more elephants in one herd than we had ever seen, between us we managed to loose count at around 100!  Smaller groups of them also made frequent visits to our camp, and as you can see, got quite close to us. 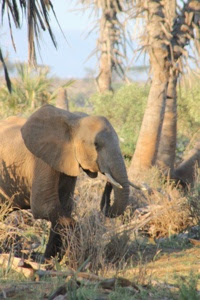 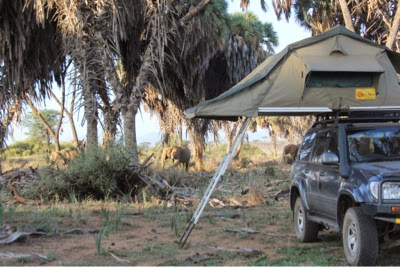 Also new to us were these grevy's zebras, that have many more, thinner stripes than those we have seen in other places and furry ears! 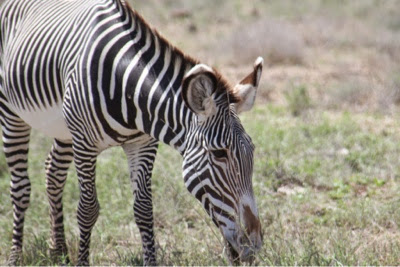 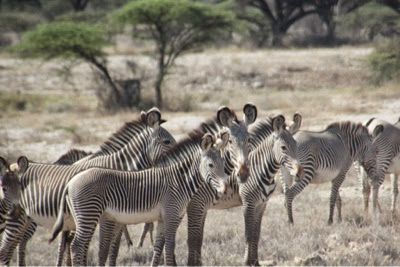 A pride of lions lying in the shade not long after having killed a zebra.  Just out of shot is a single lioness close to the carcas making sure that nobody steals what she and her little group had worked hard to kill! 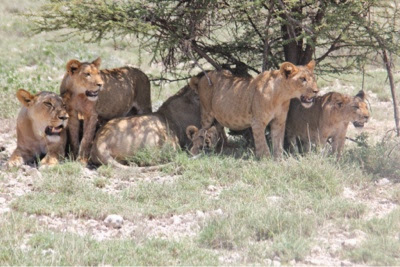 Mickey suggested as we entered the last day,that he thought it unlikely that we would see any cats as they were somewhat rare in this park!!!! First we saw a cheetah, sitting in the shade under a bush. We mainly saw it in silouhette, but it definitely was a cheetah,just resting from the heat and well camouflaged. What a thrill.
Next a leopard crossed our path,she was looking for some shade as it was very hot, after following her for a short while she decided to sit under a safari land rover.  The poor people sitting in the truck couldn't see the leopard at all and sat there looking VERY embarrassed,occasionally leaning over to see if any part of the leopard was visible!!! (We met them later, when we could talk and agreed to send photos of their experience!) We must have watched for as least half an hour. 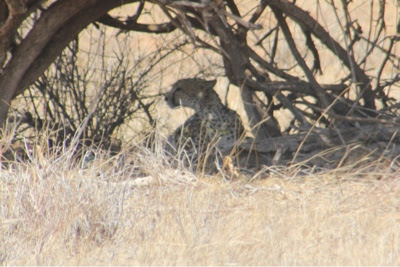 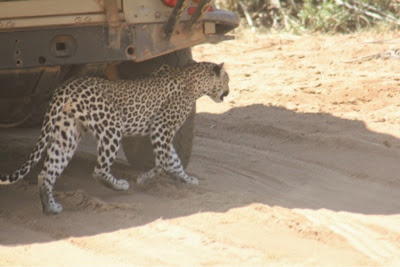 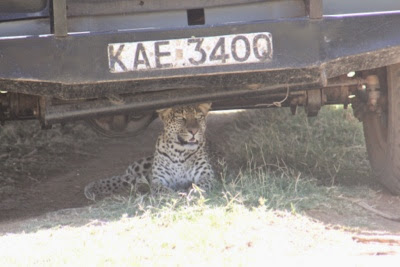 Reticulated giraffe, with their much more regular and distinct patterning 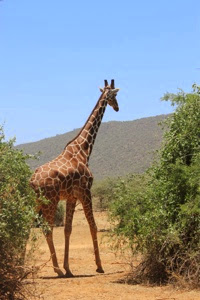 Driving along a bit later we saw a giraffe looking very alert and moving from one foot to the other uncertainly. Not far from it was a pair of lionesses,casually lying in the shade but looking alert too. They sat looking at one another for a long while but as there was no real action we moved on.
Our final action of this amazing day was when Mickey stopped to talk to some other tourists and their guide and we had a tip-off about a pack of wild-dogs. These are very seldom seen and are difficult to find as they sleep most of the day and hunt at night. Directions were given,and off we went in search. The track was rough,it was hot and we had had a terrific day,but eventually we saw the rock under which the dogs were resting. Needless to say, they knew we were there and began to snarl and yap and try to send us away.  We stayed for about 15 minutes,watching their behavior,taking pictures and just being thrilled by seeing such a rare sight.
Our final evening beside the campfire was excellent. We had had a fantastic time,seen more than we had hoped and there we were in the African desert feeling about as lucky as could be! What a fantastic day,
Posted by greynomads at 1:27 PM

I like the post format as you create user engagement in the complete article. It seems round up of all published posts. Thanks for gauging the informative posts.
cara menggugurkan kandungan
cara untuk menggugurkan bayi